Fact #1–In July of 2009 the makers of Skittles changed the ingredients (shellac, gellatin, &amp; the dye used for the red skittles) so that they are now a vegan food.

Fact #2–It is a little known fact that I use Skittles to deal with stress. It’s not what you think. I don’t just inhale a pack of Skittles in a fit of emotional eating. But more on that later…

Fact #3–Today I was given some assignments with a very short timeline and very little explanation. I was also told that our CEO has heard that I’m good with clients and wants me in front of ours right away. That all sounds great until you include the part where I don’t know much about our systems yet and need more time to get up to speed.

Today at work my mind was racing at warp speed and the internal chatter volume was maxed out. I was thinking about fact #3, as well as all the move related stuff that needs to be taken care of. I was struggling to concentrate but managed to do so by putting on my headphones loudly and drowning out the “noise”. I was so “whirly” that I forgot to stop to eat lunch or go out for fresh air. Somewhere around 3:30 I crashed. My mind caught up with itself and I felt like I was falling fast (something that I haven’t experienced in a while…but is a normal occurrence when I’m being challenged creatively or emotionally). So I went for a little walk and when I got back I got some green tea and went by Linc’s office.

Linc is our VP of Product Developement and is a super-intelligent and seemingly kind-hearted man. And The Viking let me in on a secret about him. Linc always has candy.

“Linc, I need candy or I might die,” I say matter-of-factly as I begin to rifle through the candy jar on his desk.

He turns to a cabinet behind him and begins to dig in a brown paper sack and says “Well, we can’t have that. Here you go. These will make you feel better.”

As I reach for what he is handing me I see that he is holding 2 miniature bags of Skittles. I am positive that somehow my odd Skittles sorting has become payments industry knowledge and he knows about my crazy habit. Only a few people know…but every single one of them would enjoy describing my quirky behavior to a captive audience. (CHAD!)

“HOW DID YOU KNOW?” I say almost shrilly with one eyebrow raised as I take the Skittles from him.

“Oh. Uh. Well…I have a bit of an odd Skittles habit. I sort them to calm myself down. It’s weird. I thought somehow you’d found out.”

Laughing…”Nope. You just strike me as a Skittles kind of girl. But it seems like you might just be the kind of person who tells on herself before other people can. And that is an excellent piece of information.”

I laughed and told him he’d figured me out. Then backed out of his office with my Skittles and walked quickly back to my desk for sorting.

(Note–Some variation exists depending on amount of Skittles but basic principles apply.) 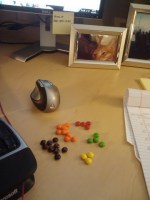 Step Two–Make one pile of candies that has an equal number of each color. The other pile is all the others.

Step Three–Randomly mix and eat the flavors from the “discard” pile while you continue on to Step 4.

Step Four–Organize 3 distinct lines of Skittles to be eaten in a specific order. (Note: The minimum # of lines is 3 but can go up from there based on equal #s of each color.) The below lines are eaten as follows: (1) Skittles in bottom line are eaten one at a time to taste each flabor; (2) Skittles in middle line are eaten is specific combinations of citrus and berry; and (3) Skittles in top line are eaten all at once “Taste the Rainbow” style.

Step Five–All of this organization and effort, as well as the sugar, has generally given my mind time to calm down and get itself neatly back in order. Continue on to good decision making and improved productivity levels.

Never ever ever let a Skittle Sorter bring Skittles into a movie. They will distract you by repeatedly tipping their hand toward the screen in an attempt to get enough light on the candy to make good combination choices.

Skittles are also a very bad road trip idea if the person DRIVING is a Skittles sorter. The only solution is for you to let them use your hands and for you to do what they say. Do not try to mess with the flavor combinations and patterns. You WILL be sorry.

This same thing will happen with other candies…such as Smarties, Runts, Gummie Bears, etc. M&amp;Ms can be sorted but only by color…not flavor combination and are therefore not as relaxing.

Error: Twitter did not respond. Please wait a few minutes and refresh this page.